It’s difficult to know everything that goes on below your flooring. Underneath the hardwood, laminate, tile, or carpet lies the subfloor, and it’s a component that only gets attention during a full-scale renovation or a full-blown problem. Even some of the telltale signs are easy to ignore. By the time that the issue becomes apparent, it might be too late for your subfloor.

A subfloor is the structural sheathing that spans the floor joists. It’s almost always completely hidden under some type of finished-flooring material. Depending on when a home was built, a subfloor could be made from softwood boards like pine or fir, plywood, or OSB (oriented strand board). OSB is a composite of glue and strips of scrap wood, in sheets 4 feet wide and 8 or 12 feet long. OSB is fast to install and less expensive than real wood or plywood, making it the go-to material for modern subfloors.

Subflooring can last a very long time. Under normal conditions, a subfloor can last as long as the house itself. However, should a subfloor be damaged or defective, it may only last 20 to 30 years. Should this be the case, a homeowner might need to peel back the layers of flooring and get to work. Here are five signs it’s time to replace a subfloor.

1. Those squeaks could be calling for your attention.

It’s not uncommon for flooring to have a little squeak to it. Often, it’s so typical that it goes completely unnoticed. If your floor is starting to sound like the Tin Man without his oil can, however, it might require some attention. Squeaking occurs when the wood in your subfloor rubs against a nail. Under ideal circumstances, the nails hold the subfloor firmly to the joists, avoiding any squeaking issues. Should that subfloor begin to warp or twist (especially common in softwood subfloors), nails will begin to work themselves loose from the joists and those squeaks will begin to speak up.

Issues with a subfloor become far more apparent when walking through a living room feels more like a stroll through rolling hills. If a floor begins to sink between floor joists, it’s a sure sign that there is an issue. This is commonly caused by moisture issues deteriorating the wood, but it can also be caused by improper installation. When subfloors are installed, any end-to-end joints between boards or sheets are supposed to meet on top of a floor joist. Should that joint be off by only an inch, over time foot traffic will cause the end of the sheet to sink.

3. Moisture could be causing your cupping floorboards.

There aren’t many things in a home more beautiful than a well-maintained, well-polished hardwood floor. Even a small area of cupped floorboards can take away from the pristine appearance. Cupping occurs when hardwood floorboards begin to curl along the length of the board, somewhat like a taco shell but less pronounced. It’s most often caused by moisture. The moisture issue probably isn’t being caused by the subfloor but if the hardwood flooring above is cupping, it’s a safe bet that the subfloor is suffering as well.

4. Cracked and popping tiles could be a material issue.

Cracking and popping tiles are a sure sign that something isn’t right. A properly-adhered tile should go in and out of style a few times before it works itself loose. If the back of the loose tile has dried thinset covering it completely with no signs of trowel marks, you’ll know that this is going to be a subfloor problem. While moisture can certainly be the suspect, it’s also common to find that the wrong material was used for the subfloor. Cement board (a sheet of lightweight concrete and fiberglass mesh) should be laid over top of the subfloor for any tile project. It strengthens the floor, removes bounce, and gives the tile a better substrate to stick to. Regardless of the reason, cracking and popping tiles are a sign that something’s going on with the subfloor beneath. 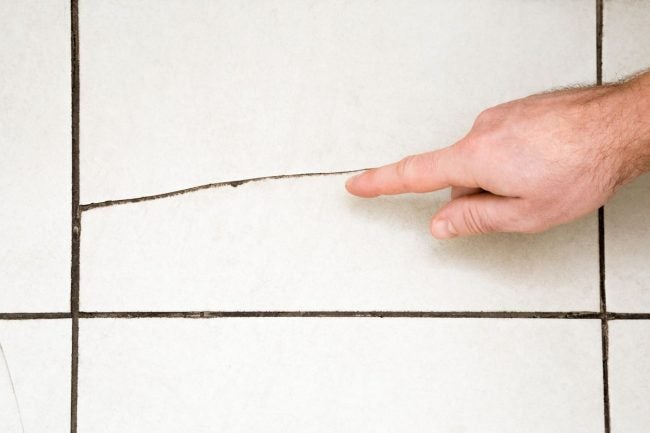 Clearly, water is a floor’s mortal enemy. If there’s been water sitting in between the finished flooring and subfloor, there’s a good chance there’s some damage. If there was a leaking drain in the wall or a leaky sink nearby, or if there was a section of the roof that was leaking during the last storm, your subfloor might’ve taken on some water, and it’s time to investigate the extent of the damage.